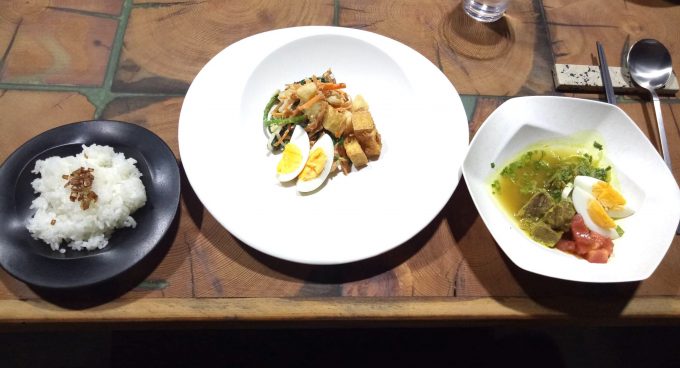 On 29th-30th October 2019, the internship activities took place in A_Restaurant.

The schedule is testing the recipe of Indonesian cuisine. The days before, I have shared the recipe with the restaurant kitchen members and discussed the ingredients that are needed.

There are  difficulties in finding some ingredients in Japan, especially in Kanazawa. That makes me a little bit nervous in the beginning.

First day (29th October), we started cooking the appetizer (Gado-Gado), main dish (Soto), and dessert (Kolak). The members who are helping me in the kitchen are Kon-san, Tai-chan, Sena, and Nogi-chan.

I learned how to adjust with them during the preparing, cooking, until finishing process. Since they are all professional, I don’t find any particular difficulties for them in collaborating with each other during the overall process.

They know what they have to do first, the next steps, and so on. They often asked me questions to confirm about the ingredients quantity, and the way to do some steps.

With everyone’s cooperation, the cooking was done right on the lunch time. There are Gado-Gado and Soto with rice. All of the restaurant team eat together. I could see various expressions from everyone’s face.

I think they may not familiar enough with the taste, but most of them said “Oishii…” and looks quite okay. I will later ask them personally about their impressions to the foods and what do they think to make the recipes taste better.

After lunch, the process of dessert making is begin. The overall process is pretty much the same, I feel that I already got used to coordinate with them better. I started to enjoy it.

The dessert making didn’t take too much time. It is ready to serve while Usami san, guest from Pasona is coming to the restaurant to visit me. She got the chance to try Kolak with other restaurant members. I’m glad that everyone looks happy with the taste.

Second day (30th October), the plan is continuing to make the other recipe. They are Nasi Tumpeng, Fried Tofu, and Fried Chicken. I bring the Indonesian seasoning (peanut sauce, fried shallot crumbs, sweet soy sauce) in hoping to make the taste better and to save more time.

During the process, I changed some of the steps after I got some advice from my aunt the days before and considering the kitchen’s condition that is not same as my house’s kitchen. The change was so sudden, but the kitchen members are very fast to adapt and the process of cooking are going well in overall.

The cooking process is finished in the lunch time. We taste the food together. Nogi-chan made an improvement by cook the instant noodles and served like in Picture 3. It’s actually not common to serve noodle with rice, but everyone seems to like the noodles’ flavour.

Actually, there are addition of two kind of Sambal, the regular Sambal, and Sambal Terasi (Sambal with shrimp paste).

The vegetables also has peanut sauce dressing that I bought from home (but it is not visible on Picture 3). Most of the restaurant staff are surprised with both of the Sambals’ taste because it’s too spicy for Japanese people. But they said it’s a nice combination with the dishes.

I am glad but also a bit worried, hoping they will not get a stomach ache later. While we are eating, Takeshita san choose the Indonesian music as the backsound and I like his choice, it makes the ambience feel more Indonesia.

What Did I Learn

Taking part on A_Restaurant activities, especially in the kitchen, makes me learn a lot of things. First of all, I have to be informative in how to provide information to others, both written and verbally as well.

It has to be clear and detail so the  misunderstanding can be avoided. I tried to talk slower, more cleary, using more Global English and a little bit of Japanese.

Be aware and alert with the surrounding, it’s like not only to focus on your own work, but we have to be ready in helping each other when needed. Also be spontaneous in knowing what step we should do next is also important.

Actually, I’m still struggling with this matter, but as I have participated two times, I can feel that I’m already get used to be with the flow better. In the kitchen, many conditions can be happened, especially when it comes to the things that are in my responsibilities, I have to think clearly and decide fast, so it will not delay the overall teamwork process.

During the process, I learn to trust my ability and trust others’ too. At the beginning, I was worried because the situation is different from what I used to be cooking. I also worried, whether will I work well with them, who are professionals? Can we make the taste as delicious as the original Indonesian one? Yes, I was too much overthinking.

I realized that I shouldn’t have to think like that. I just need to trust myself, trust them, focus on what we can do, focus on what we can control, and be optimistic all the time. To sum it up, kitchen work and restaurant service are all about communication and teamwork. Seeing everyone were satisfied with the dishes that has been cooked is a kind of happiness.

The smell of Sambal Terasi is a little bit strange in the beginning, but once it is eaten with fried chicken and fried tofu, it makes a nice harmony. Drinking sweet iced tea may be a good idea while eating spicy foods. I would like to eat more noodles!

The taste of Soto is a little too spicy, but the umami taste that comes from beef is nice. I like the freshness of Gado-Gado vegetables, but I think it needs more salt or soy sauce. Kolak is very tasty, the sweetness is enough, I like the kabocha better than the sweet potato.

Nasi Tumpeng has a nice savory aroma, the combination between rice, tofu, and chicken is good, but once it is eaten with Sambal, it is too spicy. I like Sambal Terasi (with shrimp paste) better than the regular one. The peanut sauce dressing for vegetables is delicious, I think it’s similar with Japanese sesame dressing. The taste will be better if either the sweetness or spiciness is added more.

I think the taste of Soto is good, it is just right. For Gado-Gado, it could have been better. It was like something is missing, so we have to add more taste next time. I like Kolak taste, it has a nice balance between the syrup and coconut milk. It is warm, so it is suitable for the current season.

The flavour of Nasi Tumpeng is good, it just needs more salt. The chicken and tofu taste is normal, nothing special, the taste could be improved more. But once they are eaten with sambal, the taste turned pretty good even though it may be too spicy for Japanese people. I like Sambal Terasi better than the regular one. I think the peanut sauce dressing’s taste is better than the previous for Gado-Gado one.

The overall taste was good, I think most of Japanese people from all over the country will be liking the taste. Sambal helps a lot in giving the extra taste. The dishes could be better if more umami taste is added.

I like the peanut sauce taste in Gado-Gado. For me, Soto is delicious but maybe for some Japanese it will be not very familiar for them and they would be surprised with the taste. The coconut sauce on the Kolak smells so good, it feels like not being in Japan when we taste it.

I think Nasi Tumpeng’s turmeric taste is delicious, but Sambal is too spicy. The Sambal reminds me of Chinese cuisine, but I like Indonesian taste better. 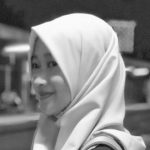 Stayed in OPENSAUCE Inc. as an internship student from October to November 2019.